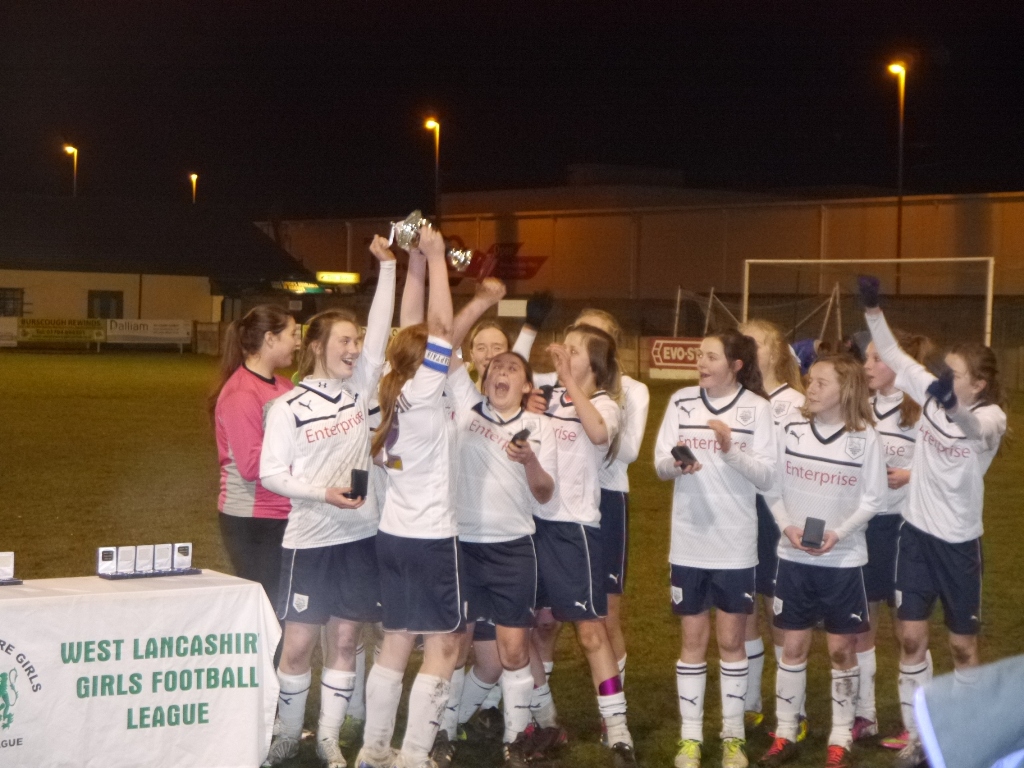 The girls went into the final in a confident mood having gone unbeaten this season.  The previous meeting between the two sides saw the Whites come away with all three points after a 2-1 win.

The early objective was to attack right from the the first minute of the game and put City’s back line under pressure as much as possible.  The adventurous line up clearly showed the Whites intentions with Olivia Wilkes, Olivia Rees and Becky Smith all in the starting line.
Olivia Cooke occupying the role just behind the forwards. The tactic worked to perfection
as, with only 14 seconds on the clock the Whites had taken the lead.  Becky Smith
caused chaos down the right hand side turning the City left back inside out and
crossed brilliantly to the far post where Olivia Wilkes cleverly found space and
struck a lovely first time shot which was beaten out by the City keeper.  Olivia
Rees was typically quickest to react and scored off her knee in true predatory
fashion.

Preston continued to dominate possession but City looked a threat on the counter attack and the back 3 of Ferguson, Bruce and Cardwell held firm ably assisted by Harvey in goal on the few occasions they were breeched. It was PNE though, who got the important second goal.  Karis Harrison scored a carbon copy of the goal she had scored against City earlier in the season finding the net again from a free kick to make it 2-0.

After a great first half performance it was important that complacency did not creep into the girls play.  City showed they are a good side with good players and were a constant threat on the counter attack.  The instruction was to go out and win the second half just as they had won the first half.  No sitting back, same again please.

And they didn’t disappoint.  Neve Nizinkicwicz-Steel scored a third with a beautiful crisp
strike into the bottom corner.  There were chances at both ends for more goals
but the score finished 3-0 and the Whites deservedly lifted the cup.

All 18 players in the squad played their part both on the night and in the games
leading up to the final and deserve huge credit for the hard work and
application they have put in so far this season.  Well done girls!