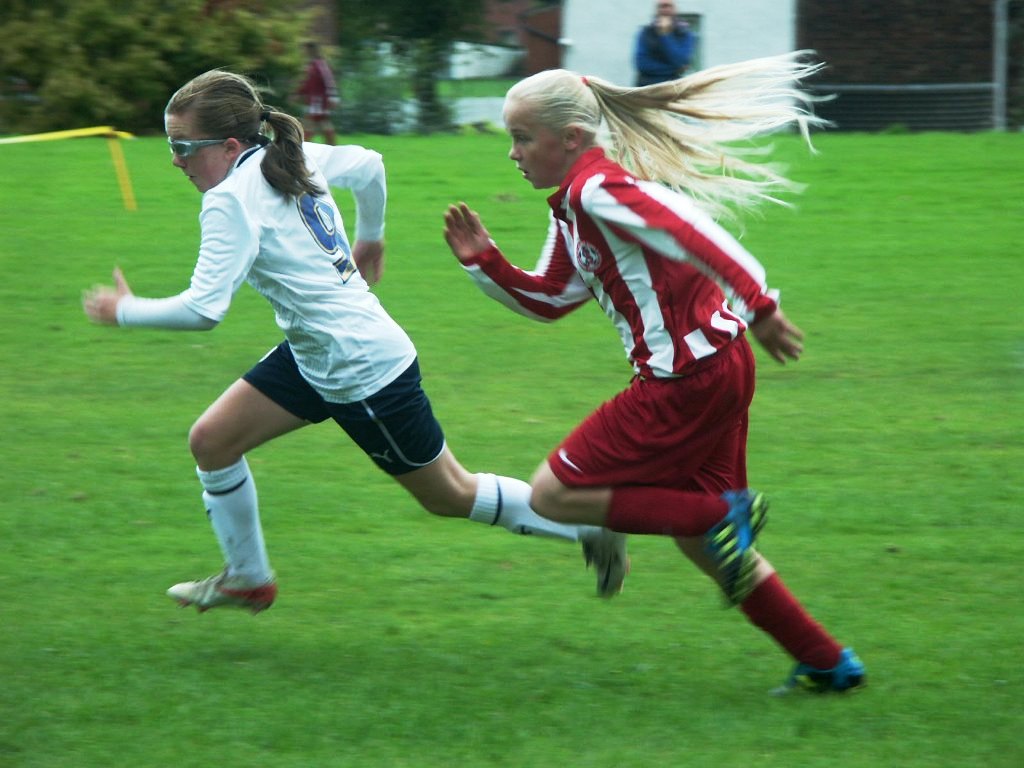 It was another strong weekend for our Club with all teams that managed to play, despite the inclement weather, recording victories

On a rain soaked Sunday afternoon at UCLan Sports Arena our U16s notched up another win in the U18 Youth league to retain their 100% winning start to the season and set up a crunch League game next Sunday against Academy Juniors who also have won every League game so far this season.

Manager Steve Collinson said after the game “Yet again our players delivered against older opposition and whilst it was a solid team performance, Rebecca Ruscoe was outstanding today.”

Our U14’s showed their character against a strong St Helens side on Sunday. After going a goal down early on the visitors edged their way back into the game and pushed for an equaliser but with St Helens always looking dangerous on the counter attack this game was going be far from straightforward.

With 15 minutes left on the clock the equaliser arrived with a touch of luck. A Chyna Appleton strike was deflected into the bottom corner. This proved to be the watershed and a further four goals were added. Olivia Rees continued her impressive scoring run by grabbing a brace with Hannah Wright and Becky Smith also beating the excellent home keeper.

Manager Paul Gray said “Lots of credit must go to St Helen’s today who proved to be tough opponents with good players who play the game in the right spirit.”

To see photos from our Under 14s game against St Helens please click here.

PNE Under 13’s rounded of a great month with another Home victory and took their goals tally up to 34 in the last 4 with a 11-0 victory over Wigan Athletic White.

The Home team managed to carry on their good form in front of goal and deserve a great amount of sportsmanship by playing the majority of the second half with 8 players after one of the visitors players was injured and could not return to the field. The goals coming from Lillie Marvill (4), Amy Parr (2), Georgia Parkinson (2), Beth Kirby, Molly Singleton and Lauren Houlding.

Manager Ashley Wallace said; “I’m obviously pleased with the result but I am much more pleased with the clean sheet and the development we are seeing in each and everyone of our players. In the second half the supporters got a glimpse of our passing game at its best and hopefully that will continue to improve throughout the season. We have had a great month, but complacency will not creep into our game as we seek to improve with every game.”

The poor weather in the preceeding week threatened to postpone this game but swift thinking by both Clubs and the League allowed the game to be switched UCLan Sports Arena and take place on Saturday morning.

Two goals from in form Rebekah Barker sealed the win for PNE.

Manager Stuart Tomlinson said “We passed and moved well today and the quality of our general play was also high. However, we need to have more of a cutting edge in front of goal and this is something that we will be working on in training this week ahead of our game against Manchester City at the weekend.”

Goals from Jodie Pickering (2), Katie Woodhead and Abbie Whittle helped PNE to a 4 – 0 win against Burnley.

Manager Adam Cameron commented after the game “We played very well in the first half as Burnley tried to make things difficult for us. I was pleased with the way we got the ball wide and the linkage between midfield and defence. We have three hard weeks ahead, but if we work hard and follow the game tactics as we have been doing, we will do very well over this month.”