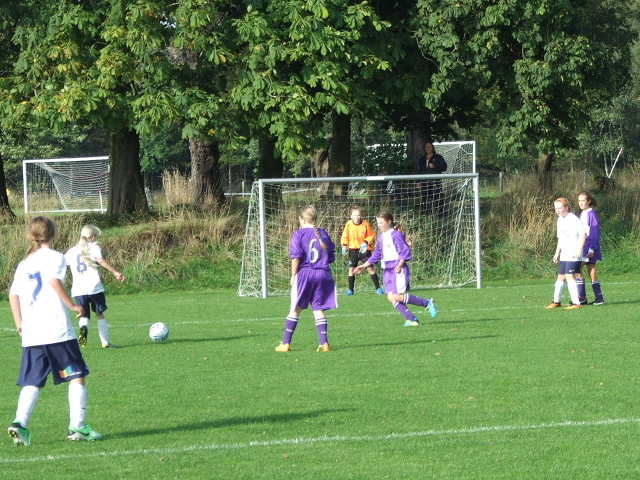 Never mind the fact that this was North End girls’ first defeat in League and Cup since  they lost at Blackpool last December – playing the entire match with a player less against a physical Fillies Side, the girls put in a performance to be proud of.

Katie Woodhead was outstanding yet again – form that has seen her selected for Lancashire. She has now scored twice in every game this season, opening the scoring after just two minutes, and later getting an equaliser for North End within thirty seconds of the 2nd half restart.

In between these two Preston goals, Fillies had netted from two well worked moves, and they had played some good attacking football, making full use of their extra player and giving Ellie Atherton a very busy time in goal.  Michaela Weyer, playing in defence today, was also superb, making perfectly timed tackles and valuable interceptions.  Hannah Chlodek worked incredibly hard again alongside her, making great blocks and challenges, but she had to come off after 16 minutes, as she was experiencing breathing difficulties. To Fillies’ credit, they sportingly reduced their team to six players whilst North End were down to five.  Having rested a while, Hannah was eager to come back on, and she continued the game with her usual gusto.

Having equalised so early in the 2nd Half, North End almost took the lead. Midfielder Georgia Pratten, who had one of her best games for North End, received the ball out wide on the left, cut inside and struck a fierce shot just over the bar.

Instead it was Fillies who regained the lead, from a corner. But still North End were managing to get forward. Abbi Whittle’s movement into space and lovely touches were at the centre of some excellent moves by the North End  girls throughout the game. After a piece of great skill to beat her marker she laid the ball off  neatly to Georgia who was prevented from getting a shot in by strong Fillies defending.

Fillies’ fourth goal, 14 minutes into the half, was a controversial one, as Ellie was clearly shoved and impeded by a Fillies’ forward as their free kick from 20 yards out was taken. The North End girls were finally tiring now, and the space was opening up on the pitch.  Ellie had to make more great saves before Fillies made it five.