This was another hard fought but well deserved victory for the North End girls, with the three points only made safe in the closing minutes of the match.

Euxton started brightly, forcing Ellie Atherton into two great saves with her feet in the opening minutes. Katie Woodhead then had a shot go just wide, and North End began to develop their momentum. Dana Billington crashed the post with a cracking effort from 20 yards, and minutes later, hit the post yet again, the ball bouncing kindly back into the keeper’s arms. The goalie then had to dive low to her left to keep out a shot from Katie. Just past the half way mark in the first half, the deadlock was broken. Katie played a lovely pass through to Georgia Pratten who hit a great shot with the outside of her right boot to the keeper’s left and into the net. 1-0 and that the score remained the same up to half time was largely due to the Euxton keeper. North End peppered the Euxton goal with shots – Dana had three more attempts on target well saved, and Lauren Tunstall and Katie were also denied by the goalie, whilst Georgia put a shot just wide.

North End continued their dominance into the 2nd half, but with only one goal in it, Euxton were still having moments of pressure on the North End goal. They were kept at bay by superb interceptions and perfectly timed tackles from Hannah Chlodek and Michaela Weyer in particular.

North End were playing some lovely passing football and Dana , on her return to North End action, was on outstanding form and at the centre of most of the moves . Hannah, Katie and Dana combined well together, before Dana then played a great ball into Georgia who squirted the ball wide, and Abbie Whittle’s shot was well saved. Lauren then played a tremendous ball down the line to Abbie whose excellent cross to the feet of Katie was cooly finished for 2-0. Soon after, Katie and Abbie combined superbly again down the left, and this time the cross was cut out by Euxton with Georgia looming to strike. Moments later, a shot from Georgia almost sneaked in at the near post, but the Euxton keeper managed to knock it away for a corner.

The game had opened up, and next Ellie had to make a terrific high save to her right, pushing the ball past the post with her right hand. Hannah then made a fantastic charge from inside her own half all the way into the Euxton penalty area, but the effort on goal went just wide. Katie won the ball from the goal kick and had a brilliant run herself down the left, beating two players, but again a goal kick was the result. It was then that Euxton pulled an excellent goal back. Their no.10 received the ball near the half way line direct from a great kick by the keeper. Her powerful, pacy run split the North End defence, and she slammed the ball past Ellie into the net.

It was a tense few minutes with Ellie having to make another great save with her feet before Katie sealed the victory with her second goal – and just as with North End’s second goal, a perfect ball from Lauren was involved – this time played in across from the left for Katie to put away. 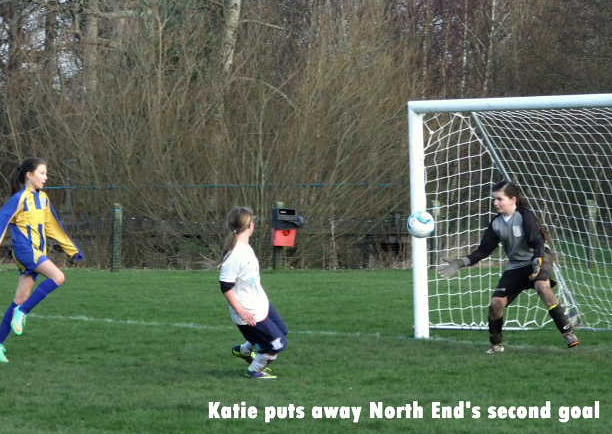