Our own Holly Rawcliffe who coaches our U14’s is off to the USA in August having been accepted for a 4 year scholarship  at Limestone College in South Carolina, where she will be looking to study General Physical Education

Holly will depart for America in August for the start of their pre-season and leaves PNE after four years which saw her pick up a Lancashire County Cup winners’ medal amongst other trophies with the Development Squad.

Speaking about the scholarship, Holly said: “I’m very excited to go to America. It’s been my dream since the age of about 11 to go and play football over there and study at university there. It’s such a good opportunity for me and I couldn’t turn it down.”

“Laura Walker was a big inspiration to me to try and get a scholarship. She went to university in Louisville and told me all about her experience. It sounded amazing and it made me want to go so much more. She told me how much she developed, not only as a player but as a person too and I hope this will happen for me as well.”

“Of course I will miss Preston, I’ve been at PNE since I was 14, nearly 4 years now so it’s been a while. Preston North End is a massive part of my life, not just playing for them but coaching the u14s Girls and supporting them too. We have a great bunch of players here and I will definitely miss them all. Its going to be hard leaving them behind as well as all my friends and family too.”

Good Luck Holly and we hope more of our girls will be following in your footsteps in the future! 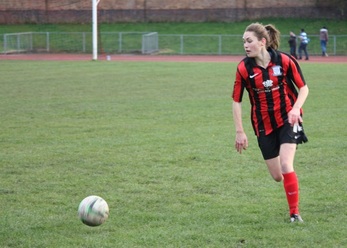