Under 12’s in harsh loss 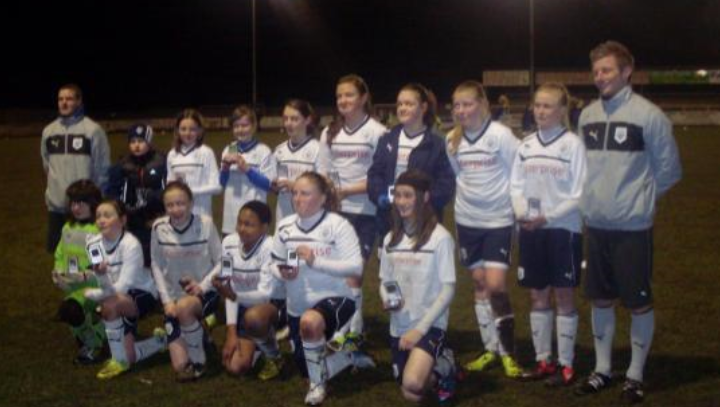 The under 12’s fantastic cup run came to an undeserved end last night after an unfortunate 3-1 defeat.

After not losing a cup game since their Under 10’s season the girls came into the game full of confidence and this showed as PNE had all the early play, showing some great passing moves and a great work ethic.

However this was all undone by a swift Manchester City counter attack and after the play broke down in the City half, the ball was cleared and found the City striker who showed great skill to beat a defender and slot the ball home to give City the lead.

This was perhaps the only meaningful from City in the first half. Aside from a few more counter attacks that were very well dealt with in the PNE defence. Between these counter attacks PNE set up camp in the City half and saw chance after chance go by. With the City defence coming under severe pressure their goalkeeper produced some quality saves.

At half time the girls were told not to change anything about and that chances would come if they continued to work as hard as they had in the first half.

The second half began as the first ended and PNE continued to mount the pressure on the City defence, through some fantastic runs from midfield byHannah Walsh and down the wings from Michaela Halsey and Charlotte Greenwood, causing chaos in the City defence once more.

However once again City managed to counter from clearances to score twice in quick succession leaving the girls 3-0 down and shell shocked. Unfortunately their great play was not being rewarded with goals.

This blow sparked the team into life and they quickly pulled one back, as Eve Walker received the ball deep in midfield after a great pass from Charlotte Greenwood before running past the majority of the City team to cooly finish with a lovely chip over the City goalkeeper.

More of the same followed with Katie Towers, Michaela Halsey, Gemma Cooke and Hannah Walsh all going close, however City were now in full defence mode and we were unable to find a way through to cap the great display with the goals it deserved. The full time score ended 1-3.

The girls should take heart from their performance, Josh and Joey couldn’t be more proud of their efforts and know that they will come back fighting next season; they are a credit to themselves and the club.