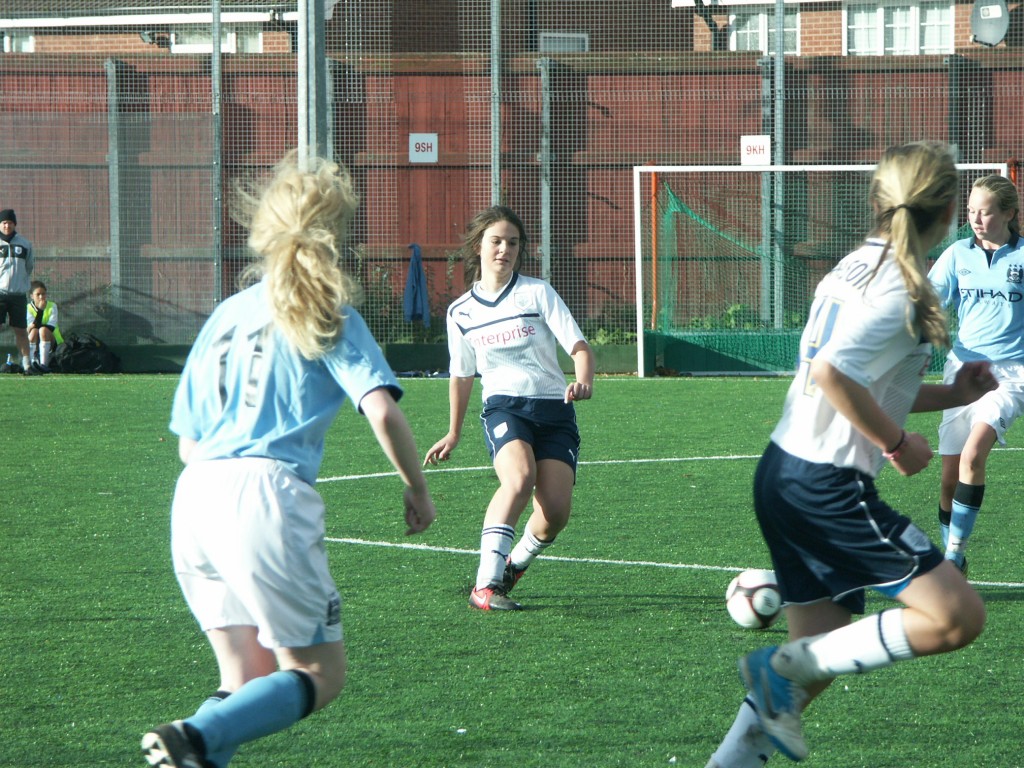 A disrupted build up to the game in Manchester threatened to knock the unbeaten whites off their stride.  However, having to warm up on grass and playing the actual game on 3G AstroTurf and a much delayed kick off wasn’t enough to stop the whites from maintaining their 100% record this season.
This was a different kind of performance from the visitors who had to play a quick and physically strong City side on a pitch and surface the home side train and play on week in, week out.  We saw a little bit less of the quick passing and moving but bucket loads of determination and work rate.  This fantastic attitude was displayed brilliantly by the two Preston forwards Neve Nizinkicwicz-Steel and Olivia Wilkes who kept getting on the ball and trying to make things happen despite the close attention of the much bigger City defenders.  And the duo got their reward when they combined on the edge of the box for Nizinkicwicz-Steel to add another to her impressive goal tally for the season.
This goal seemed to spur City on and they stepped up a notch, immediately putting the North End defence under pressure.  Just minutes after the whites had gone one up, the scores were level.  There was nothing Molly Dell in the Preston goal could do as the City striker swivelled in the box and smashed an unstoppable shot into the top corner.  But this PNE side has shown real character this season and heads didn’t go down and the girls continued to go forward and look for goals.  Clever play on the edge of the City box drew the foul and North End were awarded a free kick.  Karis Harrison stepped up and curled a beautiful, inch perfect free kick into the top corner to put the whites in front at half time.
The second half was an end to end affair with chances at both ends, Molly Dell in the visitors goal and the home keeper both pulling off good saves to keep their sides in it.  It was the visitors who came closest to adding another goal though.  Leah Molly hit another long range blockbuster that had the keeper beaten only for it to crash back into play off the crossbar and scrambled to safety by the City defenders.
Another good performance from the girls, showing they are developing their mental and psychological capabilities and their tactical understanding of the game to add to their technical ability.

After going a goal down, the girls came back with a fairly convincing display from the whole team with 5 different scorers on the team sheet – Lauren, Lilly, Beth, Pip and Georgia. Next weekend we face our greatest test so far this season against a Man City team that ran away with the League last season.

The Under 10’s played Euxton away, and produced their best team performance of the season, with just six players. Every player did their job, and continued to sprint back to position at all times, they understand now what it takes to win a game, and understand what to do to get the win. Individually everybody was on form and played very well, Jodie finished very well for the first, and Katie got the other two. The three midfield and forward players played pass and move football which was a joy to watch.