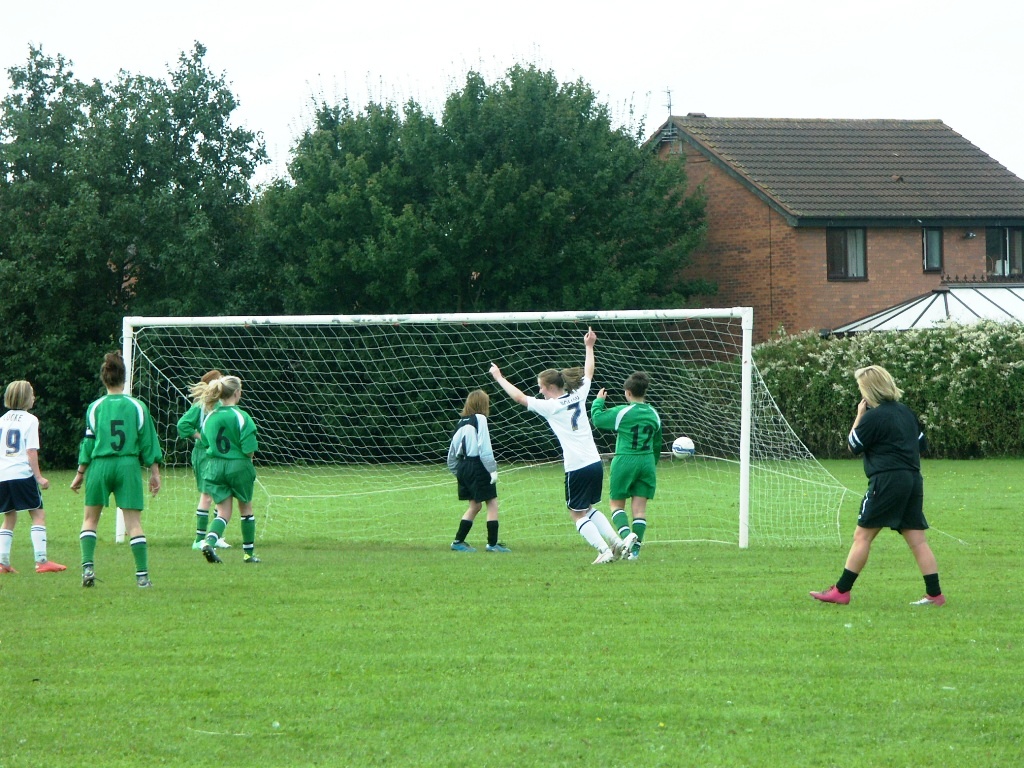 Our teams had another successful weekend of games and there were two nine goal thrillers being played out side by side at UCLan Sports Arena on Saturday 15 September.

Our u16s made it two wins out of two in the West Lancs Girls u18 Youth League with an
8 – 1 victory over TMS.

The u16s shared the goals around the team with Ramshead, Ruscoe, Wignall, Kuta, Rawcliffe, Crook, Taylor and Holden all getting on the scoresheet.

Manager Steve Collinson commented “It’s so far so good for us as we make a big step up to play in the Youth League. TMS worked hard today but I was pleased with the way we played and the way each player’s game is developing to cope with the rigours of playing against older opposition.”

This was one of the games of the day in West Lancs Girls League and what a game it was. If ever there was an advert for Junior Girls football in Lancashire this was it. Both teams were at the top of their respective games for a thrilling match which swung one way then the other with Academy grabbing a last gasp winner.

Manager Chris North said “Obviously we are very disappointed to lose such a close game but we’ll bounce back quickly and hope that the return match at Academy Juniors later in the season delivers another feast of football.”

This was another strong performance from our u14s against a Burscough side who possessed some very talented players. It was the excellent team play of the visitors however, which decided the game. On the scoresheet for PNE were Olivia Wilkes (2), Leah Molloy (2), Chyna Appleton 2, Ellie Ditchfield and Olivia Cooke. Next week sees the visit of Blackburn CSC which promises to be the toughest challenge to date.

Manager Paul Gray commented “There was some excellent 1 and 2 touch football today coupled with some sensational strikes which shows the continued development of the group.”

Please click here to see photos of our u14s in action against Burscough and last week’s game against Euxton.

Our u13s carried on from last weekend’s good start to the season with a 9-0 victory over a Horwich team who worked tirelessly throughout the game. A series of good passages of possession linked with a real attacking purpose saw our u13s come away with the 3 points. Stand in skipper for the day Molly Singleton grabbed a hat-trick whilst there were braces for Beth Kirby and Miah Weir and goals from both Lauren Houlding and Philippa Dale.

Manager Ashley Wallace said after the game “I’m pleased with the way our players controlled the game today and every credit to the Horwich goalkeeper who was magnificent.”

Our u12s recovered from a disappointing defeat in their opening fixture to record an excellent 8-0 victory against a strong Burnley side at UCLan Sports Arena on Saturday 16 September 2012.

It took just 40 seconds for PNE to open the scoring in the game with Charlotte Greenwood finishing smartly from a Hannah Walsh corner. Caitlin Wolfenden added a second just 2 minutes later after a superb header again from another excellent Walsh corner. Three more goals were added before half time and PNE continued to press home their advantage in the second half to score a further three goals against a determined and tireless Burnley side. PNE’s goalscorers on the day were Charlotte Greenwood (2), Caitlen Wolfenden, Eve Walker (2), Hannah Walsh and Emma Collins (2).

Manager Josh Mountain commented “The team are showing excellent progress and every team member is showing an outstanding understanding and attitude to their football, long may it continue as the season progresses.”

Our Under 11s continued their 100% winning start to the season with their 4th victory on the bounce against an energetic and competitive Crosby Stuart side on Sunday 16 September in Bootle, Liverpool.

Crosby Stuart posed some early problems for PNE but it was an excellent piece of team play that saw Kalantha Hirst break the deadlock with a cool side foot before further goals from Emily Hughes, an unfortunate Crosby Stuart own goal, and a hat trick from Sarah Harvey sealed the win.

PNE u11 Caretaker Manager for the game Peter Millington said “It was a strong performance from the PNE players today and they deserved the victory, though I was impressed by Crosby Stuart who kept on making life difficult for us throughout the game.”

Played on the adjacent pitch to our u15s game against Academy Juniors on Saturday 15 September 2012 our supporters didn’t know which way to turn as yet another nine goal thriller unfolded.

Both teams worked extremely hard and the technical ability of both sets of young players was remarkable as the lead went one way then the other. It was a shame that a team had to lose on the day but Blackpool stole a late winner to take the three points back to the Fylde coast.

PNE u10s Manager Adam Cameron commented “Our players worked so hard today and showed real determination to keep trying to score and attack. Right to the last second the work rate was exceptional, and there was some great technique on show from both teams.”