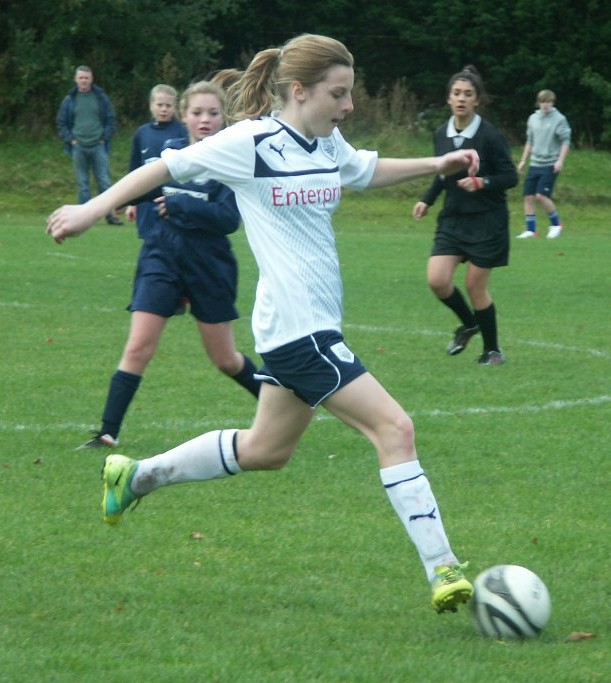 Our U15s had a tough game at Burscough but came out on top with another goal for Emma Hickson and two from Sarah Chadwick.

In a tough match the game was 1-1 at half time after we fell behind Emma Hickson levelled matters before the break.

Burscough caused us lots of problems but the girls added more width to the game which lead to centre midfielder Charlie Henderson putting in a player of the match performance pulling the strings in the second half.

Captain Sarah Chadwick scored two second half goals to secure victory. To give us a well deserved 3 points against a Burscough side that will be challenging in the top group of teams.

The U14’s maintained their 100% record with a confident display at home to TMS.
It took the whites a while to break the deadlock despite starting brightly and keeping the ball well.
Eventually the goals came despite the efforts of the outstanding visitors goalkeeper. Neve Nizinkicwicz-Steel continued her fine form this season by bagging a superb hat trick. The prolific Olivia Rees and Becky Smith both grabbed a brace. Olivia Wilkes, Leah Molloy and Karis Harrison added the other goals.
Next week the whites the whites are in cup action and travel to Dynamo Rangers.

The Under 13s remain unbeaten after a closely fought game at Preston Sports Arena vs Burnley. The whites started the game terribly being 2-0 down after 10 minutes and after pulling a goal back via Lillie Marvill, suffered another defensive lapse to find themselves 3-1 down at half time. The team started the half well and passed the ball in their opponents half much better and managed to pull 2 goals back from Molly Singleton and Philippa Dale, to take the game to 3-3 but could not force a winner in the time remaining. Amy Parr struck the bar with an excellent free kick from long distance and the Burnley goalkeeper made a number of saves to half Preston taking all 3 points.

The team will be disappointed not to win the game, but know that they can perform against opposition such as Burnley and that all of Burnley’s dangerous play was from poor defending from Preston. Preston looked dangerous in the second half on the counter, in their slow build up play, from set pieces, from long range shots, from crosses and their only looked to be 1 winner.

Manager Ashley Wallace said ‘a great amount of respect must go to the players today, they were unhappy at half time with our start and were disappointed at full time not to win the game. To come back from such a poor start takes a lot of character and will aid the players well in future games. Burnley were over the moon at full time to get a point and I think that tells you all you need to know’

The under 12s won 9-3 against Wigan yesterday, after going 1-0 down early the girls responded fantastically and goals from eve walker, Hannah Walsh, Charlotte greenwood, Michaela Halsey and Rhiannon Cookson put us 5-1 up at half time.

After the half we pressed again and further goals from Halsey, Walsh and 2 more from walker to complete her hat trick gave us the win.

A fantastic result and all round performance from every player.