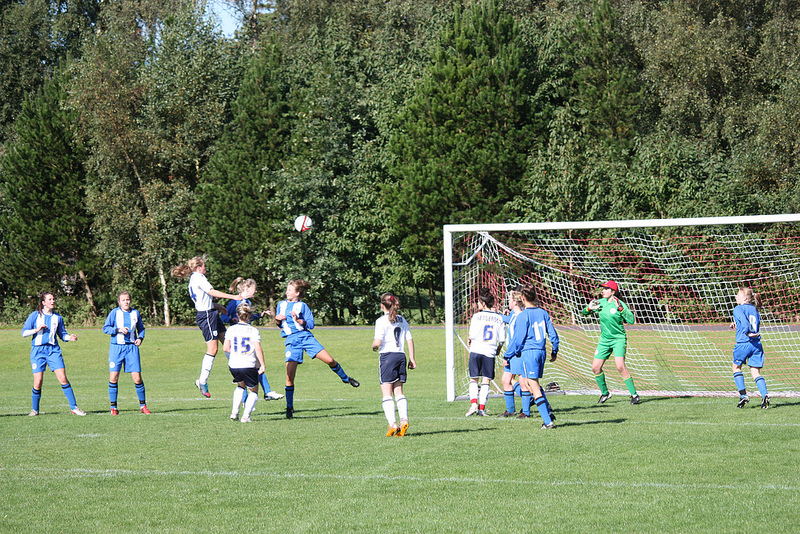 Our teams again faired well in this weekend’s round of games :

No game this weekend.

Our U15s got back to winning ways in a difficult fixture at UCLan Sports Arena on Saturday 22 September against a battling Wigan side.

Wigan came out strong and took the game to North End early on pinning the home side back in their own half. After 10 minutes the pressure told and Wigan took a deserved lead.

The Lillywhites didn’t get their heads down though and edged their way back into the game with Charlie Henderson breaking through to score from the edge of the area after 20 minutes.Just before half time North End put themselves in the lead with a spectacular volley from Emma Hickson after a quick PNE free kick.

Hickson scored again in the 50th minute and Olivia Askan with a superb solo effort added to the tally before Beth Wilson added a fifth and an unfortunate Wigan own goal completed the goals for PNE.

PNE u15s Manager Chris North said “Today was an impressive display from our u15s against a hard working Wigan side who battled non stop.”

Our u14s delivered another impressive performance this weekend to maintain their 100% record so far this season against a Blackburn CSC side who made PNE work for every minute of the game.

An early goal from Leah Molloy gave the whites the lead but Blackburn rallied and made life difficult for the remainder of the half before grabbing a deserved equaliser minutes into the second half. The home side hit back though with goals from Olivia Rees (2), Olivia Wilkes, Neve Nizinkicwicz-Steel and Molloy again rounding the game off with an audacious 20 yard shot into the top corner.

Manager Paul Gray commented “I’m pleased with our performance today and the way we kept on playing even when Blackburn put the pressure on.”

To see photos from the game please click here.

The under 13s also maintained their 100% start to the season with a 10-2 win over Town Green on Saturday 22 September at UCLan Sports Arena.

This was a confident display from PNE with goals from Lillie Marvill (4), Georgia Parkinson (3), Philippa Dale (2) and Amy Parr.

Manager Ashley Wallace said ‘We played well from start to finish. Our pressure and intensity out of possession is improving and our passing and patience on the ball are going to make us a very hard team to play against this season.”

With both teams approaching this fixture with 4 wins out of 4 games this was a big game in the u11s division.

Wigan Athletic took the 3 points with three very well taken goals but the PNE players can reflect on a game where they can feel that they controlled the majority of possession and play.

Manager Stuart Tomlinson said “There were two very evenly matched teams out there today and I was really proud of the way our players kept to our playing principles and worked hard throughout the game. Well done to Wigan and we look forward to meeting them again for the return game.”

Our u10s faced a tough away test to an individually strong Woodbank team on Sunday 23 September and came away with the three points.

This was an exciting game with both teams attacking and defending well. Katie Woodhead scored both goals for PNE in a new shape team from Manager Adam Cameron.

Adam said “The team worked well today as we shuffled our formation a little and our players are grasping the need for positional awareness. There are still areas to work on but the players can be pleased with the progress they are making.”