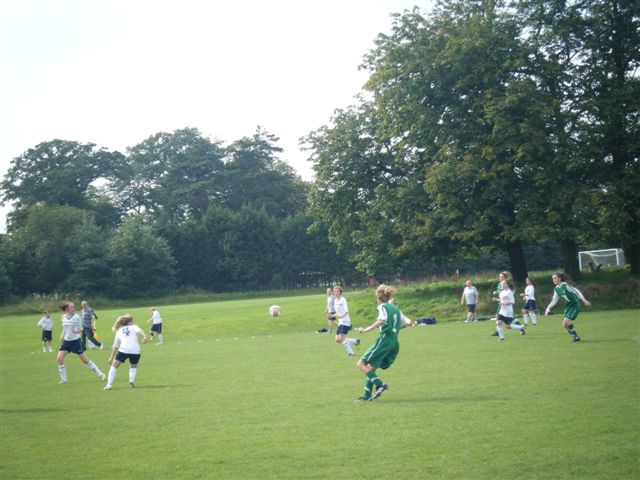 It has been a terrific opening weekend of the season for our Club with some great performances and excellent results.

Our Under 16s got their season off to to a good start with a 5-2 win over Burscough in the Under 18 Youth League at UCLan Sports Arena on Sunday 9 September.

Goals from Holly Rawcliffe (2), Emma Kay, Heather Crook and Abbie Wignall secured the win over a determined Burscough side. Manager Steve Collinson said “We played some good flowing football today and I was really pleased with the team effort. I’m happy with our overall performance and the way we played, particularly in the second half.”

Our U15s made the trip through the Mersey Tunnell to take on League newcomers Manor Club JFC  on Saturday 8 September 2012 and returned home with all three points after a strong display on The Wirral.

Goalscorers on the day were Olivia Askam, Charlie Henderson and a first goal in over a year for Borge Chanelle McManus and Toni McCoy Hopwood. Alisha Houghton and Beth Wilson both bagged a brace for the Lillywhites whilst last year’s top scorer Emma Hickson opened her account with 4 goals.

Manager Chris North commented “Manor did brilliantly well and it took us a while to figure out how to solve the problems that they posed us but I was pleased that we stuck at it and we eventually got into our stride.”

Beth Wilson was awarded the Player of the Match award from the opposition after two goals and 4 assists.

Our 14’s got the season off to a perfect start with an assured victory over a hardworking  Euxton team at UCLan Sports Arena on Saturday 8 September.

Manager Paul Gray said “Overall today was a good performance from the girls, with some excellent goals scored and attractive football played.”

Goals from Lillie Marvell (2), Amy Parr, Miah Weir and Lauren Holding helped our Under 13s  to a copycat result of our Under 16s against  a well organised Burscough side at UCLan Sports Arena on Saturday 8 September 2012.

Both teams looked liked cancelling one another out until the deadlock was broken by a superb cross from PNE’s Philipa Dale to set up Lauren Holding and then another equally good cross from Dale again to set up Lillie Marvel who coolly lobbed the Burscough Keeper to put PNE 2 – 0 up. The rest of the game ebbed and flowed with Burscough playing their part in an entertaining match and also scoring a glorious second goal.

Under 13s Manager Ashley Wallace said “There were plenty of positives to take from the game today, but there are also some areas where we need to improve and we’ll work hard in training to do this. However, if we can keep our performance and effort levels as high as they were today the results results will keep coming, that’s for sure.’

Our Under 12s faced a major test for their first fixture of the new season with an away fixture at a strong Manchester City side.

Despite an excellent effort by the U12s Manchester City proved to be too strong on the day with Manager Josh Mountain commenting ” We’ve no excuses today as we were beaten by the better team. There are some positive to take from the game and we’ll be working hard in training to get ourselves ready for our home game next week against Burnley”.

Our Under 11s have been busy in the last week playing their third league game on Saturday 8 September whilst all our other teams were playing their opening games.

Mid week saw our U11s travel to Lytham to take on a determed and well organised Lytham side in an evening fixture. Kalantha Hirst scored twice to secure the three points with Lytham’s goalkeeper producing a wonderful display to thwart everything that PNE could throw at her. With Lytham grabbing a late goal it was a anxious end to the game but PNE just about edged it on the night.

On Saturday 8 September our Under 11s made it three wins out of three with an excellent display of passing football which saw PNE run out 6-0 winners against a determined Town Green side.

Two goals each from Milly Robertson and Abbi Gould along with Sarah Harvey and Rebekah Barker strikes were enough to see PNE home.

Manager Stuart Tomlinson commented “We’ve had a great start to the season and with three games in a week our players have really put a superb effort in to remain undefeated. I’m pleased with the way our new players are settling in and the way the players are all gelling together. But we’ve got some big games coming up and we are going to have to raise our game again if we are to be successful.”

Our Under 10s delivered a solid performance in their first ever league fixture to win 5 – 0 away to Blackburn CSC on Saturday 8 September.

Goals from Jodie Pickering (2), Jas Cadwallader and Katie Woodhead together with an unfortunate own goal from Blackburn were enough to secure the three points against a Blackburn CSC team who competed for every second of the game.