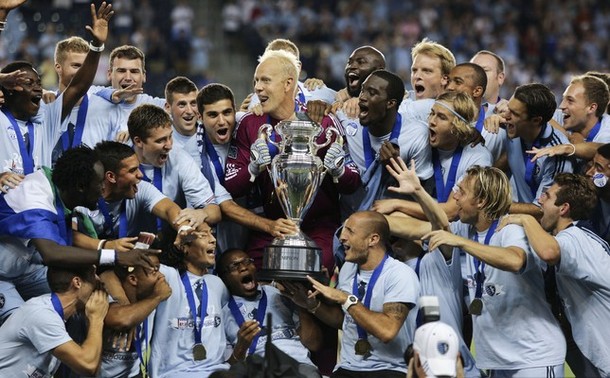 Our links with playing and coaching opportunities with major Clubs and Universities in theUSAcontinues to grow as Ash Wallace this season’s U13s’ manager has announced his departure from the Club due to his imminent appointment with Sporting Kansas City an American MLS Club.

Ash has been appointed to design and implement a world class analysis and scouting department together with coaching responsibilities with Sporting Kansas City Reserve team which reflects the expertise and abilities Ash has worked hard to acquire in his degree studies at theUniversityofLancashire, his analysis work at PNE FC and his time with our Club.

Ash joined PNEWJFC in 2009 to take on the joint manager/coach role with Steve Holland of that year’s new U10s.   Ash and Steve have worked hard to develop the squad and achieved their first trophy success in 2012 winning the West Lancs Girls Football League U12s Challenge Cup.

We are very sorry to lose a coach with the qualities of Ash but recognise his career ambitions and offer him our congratulations on his appointment with Sporting Kansas City and wish him every success in his future coaching career.

Ash would like to stay in contact with PNEWJFC and in the future we hope will be able to help with contacts for any of our players who wish to pursue footballing opportunities and University Scholarships in theUSA.  We will be keeping in touch with Ash via his Twitter account.

Ash’s appointment with Sporting Kansas City comes on the back of several of our Coaches undertaking Coaching duties in theUSAover Summer 2012 and our Under 16s departure at Easter to participate in the Dallas International Girls Cup replicating last season’s U16s and U13s who participated in the same competition. Following participation in the Dallas International Girls’ Cup two of our Under 16 squad from last season have now gone on to receive full four year Scholarship offers from top American Universities.

Steve Holland will continue as manager/coach of our U13s squad.