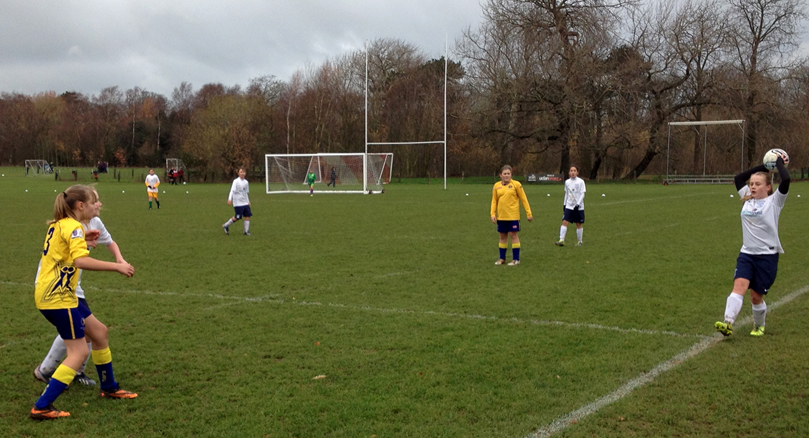 Today’s opponents Bolton may have not had much time to warm up but they were straight out of the traps and piled the pressure on a stunned Preston defence right from kick off. PNE Goalkeeper, Ashleigh quickly found herself one on one with the Bolton striker but saved well. Seconds later, Leah challenged well to intercept a through pass before Kalantha was forced to clear off the line before a third shot was saved well by Ashleigh.

Preston took a few minutes to wake up and it took the introduction of Milly and Emily to spark them into life. Milly made an immediate impact with a smart move down the right and a pass to an unmarked Lauren who turned in Preston’s first from the edge of the six yard box.

Seconds later, Preston could have extended their lead when Kalantha combined well with Abbi, who saw her shot well saved by the Bolton keeper.

Milly continued to make a nuisance of herself around the Bolton defence and found Sarah unmarked by the left post but her pass arrived with too much fizz for Sarah who was unlucky to balloon it over the cross bar from close range. Shortly afterwards, Milly drove forwards from midfield and saw a great shot go narrowly wide.

And it was Milly again whose industry unlocked the Bolton defence for the second goal. Having picked the ball up by the right touchline, she dribbled into the area before unselfishly picking out Rebecca L at the far post. Rebecca’s first shot was blocked but she made no mistake in smashing in the rebound.

And a minute later it was 3-0. Again, Milly was the provider, her pass finding Lauren with sufficient space and time to pass the ball into the net to the keeper’s left.

Emily provided what was arguably the goal of the game in the 21st minute. She picked up on a loose ball in midfield and struck a sweet shot from 25 yards through the ruck of players straight into the bottom right corner of the net for 4-0.

In the 26th minute, Lauren set Kalantha away and Kalantha shot into the roof of the net from a narrow angle to make it five. But almost directly from the kick off, Bolton reduced the deficit when their number two was found unmarked with a pass into the area and she took her opportunity well. Half Time 5-1.

Emily had the first opportunity of the second half and when she again picked up the ball in space on the half way line. Again fancying her chances from distance, she was unlucky to see her shot drift just over.

A minute later and Milly had the opportunity to open her account but her strong shot was headed away for a corner. By now, it was relentless Preston pressure and seconds later Emily struck the crossbar. The pressure paid off however when Rebecca L picked up on a loose ball on the edge of the area and shot high to the keeper’s right to make it 6-1.

Bolton seemed to settle into the half a little after the goal and the defenders Emily and Jenna were called into action more frequently. Emily posed a potent threat, driving forward each time she broke up the Bolton attack, whilst Jenna restarted the attack with some nicely picked passes out of defence.

And it was one such pass out of defence that found Sarah all on her own on the halfway line. Sarah looked to see that she had three Preston strikers over, all screaming for the ball. Sarah did well to release the ball quickly and keep the move alive and it was Milly that wanted it the most as she surged forward onto Sarah’s pass and beat the keeper to notch Preston’s seventh goal of the day.

Bolton still had plenty of life left in them and repeatedly carved out chances for themselves. On 42 minutes, the Bolton No 2 found herself clear through with only keeper Eve to beat but Eve was on form to deny her.

In the 48th minute, Lauren played a long cross field through ball to Sarah and Sarah made no mistake this time to make it 8-1.

The 9th goal came a minute later, Milly picking the ball up from a Bolton corner and running the ball all the way up the pitch to score.

And Milly rounded off the game by supplying Rebecca B in the 50th minute, Rebecca thrashing in from the right of the penalty area.

Both teams had chances in the last 10 minutes, but the game finished 10-1 to Preston.