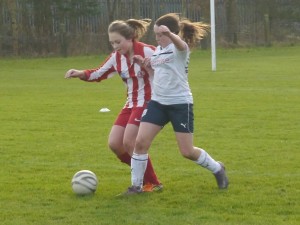 The whites continued their great form with an impressive win against tricky opponents St Helen’s.  In the reverse fixture earlier in the season, PNE found it difficult to break down the Merseyside outfit and only managed to win the game in the final ten minutes.  That wasn’t the case this weekend with Olivia Wilkes breaking the deadlock with another assured finish at the back post.  Soon after Becky Smith doubled the home sides lead with a cool finish into the bottom corner from the edge of the box.  PNE then really started playing some fantastic one and two touch football and were creating chance after chance.  St Helen’s battled hard and provided some threat on the counter attack but the Lilywhites back line held firm to keep a clean sheet.  Olivia Rees added to her impressive goal tally and Becky Smith got her second of the day.  Neve Nizinkicwicz-Steel, Chyna Appleton and Karis Harrison also chipped in with three wonderful strikes, giving the visiting goalkeeper no chance of keeping their shots out.
That’s 9 wins out of 9 in the league and a semi-final place in the cup secured so far this season.  Manchester City are the visitors on Saturday and it was they who provided the stiffest challenge so far for Preston with the Lancastrians coming back from Manchester with a 2-1 win earlier in the season.

A cold day for the girls to play in, but they played a good game against very good opposition. Hesketh started better, and scored, with good movement and passing and managed to get through the defense. Regular substitutions helped us as fresh defenders could be introduced, and after tightening up the back line, we started to threaten through some good passing and dribbling skills. We then ensured we dominated for a spell, but Hesketh were strong dribblers, and always threatened in the midfield. Katie scored a good goal from inside the box after some good defending, then passing and it stayed 1-1. The teams were evenly matched, and the improvements in all aspects of the u10s is very pleasing.